Fear and Anxiety, Anxiety and Fear

I was about ten years old the first time I was able to label a feeling as anxiety, even though I didn’t know that actual name, yet. I’d been through a rough patch, moving from California to Washington State to Connecticut to California again with my mom, and things had been a bit challenging. I remember I was in our old apartment in Glendale when the feeling hit, and although I had felt it before, this time I tried to name it. I was searching for a way to describe the feeling to myself, looking for a metaphor, I guess, and this is what came to me: I felt like there was a huge weight suspended over me, a log or an anvil or something, and it was hanging by a hair, a literal hair, and I could just imagine the hair snapping with a little silent “ping” and dropping the weight onto me. “This is what this feeling is,” I thought to myself, but it was years before I had the word “anxiety” or knew what a panic attack was, although I had experienced them for a long, long time.

This trip with Robert and The Bus was plagued by those old demons, fear and anxiety, anxiety and fear. I had anxiety about my family, the bus, money, posting this blog, my usual “am I bothering fellow campers,” and a just general sense of being both in harmony with the universe and risking certain death.

“Sometimes I think I am the single most annoying person on earth,” I said to Robert. He didn’t even respond, and I was reminded of an old friend who went to live in Japan. She told her Japanese boyfriend “I’m so ugly!” in the awful way girls do, and he responded: “Well, you’re not especially ugly.” Perhaps I am not especially annoying, either, but I sure feel that way, sometimes, and the weight of all that anxiety gets to me.

Of course, it doesn’t help that dealing with other people causes most of my anxiety, and I work with other people. My job is basically working with the public, young people, and trying to engage them, but this is a challenge for someone who is anxious around other people. I mean, I never feel anxiety about dealing with my pets. They just don’t care, and either I don’t value their opinions enough, or we get along just fine. But other people do cause me anxiety, and when I drill down and try to find out why, I generally end up with the realization that I am afraid of letting them down, or annoying them, or inadvertently exposing the fact that I am a total moron and embarrassing creep. I mean, I work hard to keep that under wraps, as you do if you want to be a person in the world (to steal from David Foster Wallace).

And it is so hard to just be a person in the world on a normal day, but when you add in an epic adventure, an older vehicle, some driving and logistical challenges, not to mention the short in the electrical system and the governor issue (about which more maybe later), it is even harder.

Then there is my old friend, fear. As a teenager, I consumed the Dune novels (really, I read all the way to Chapterhouse, through many, many Duncan Idahos), so I used to repeat to myself “fear is the mindkiller.” I found myself reverting to this on the trip as Robert was learning to drive the bus—there is a real learning curve there with the steering, shifting, wind, and braking—but it didn’t have the magical power it had when I was a teenager. I’d look into a chasm on the side of the road as we crossed one of the many high and narrow bridges on our route, and I’d think “fear is the mindkiller,” and it had no anodyne effect, just a fizzle. I imagined the car careening off the road, plunging into the abyss, and I would just not know what to do. Instead, I’d look at myself in the side view mirror and think, “You are really here, doing this. Be here. Trust the process.” However, as a life long pessimist (though not so much as some), I had trouble giving in to that. My mom’s friend Linda was terrified of flying, and she used to have me loan her my super-lucky–only- for- flying Tiki (from Dad’s time in New Zealand) because we were in complete agreement about our fear of flying. When asked why she didn’t just have a Xanax or a drink or a drink and a Xanax, Linda would reply: “Fear keeps the plane aloft.” I knew exactly what she meant, and while I am not so frightened of flying as Linda was, I still don’t care for it. I mean, the wheel may be under your butt in a plane, but there is nothing under the wheel…nothing at all except air and eventually the very hard ground (or ocean, but that’s another story).

Eventually, the sheer number of miles won out on this trip, and although I had a freak out on the 118, forcing us to ramble home slowly through the Valley, that in and of itself turned out to be OK. But what was I so afraid of?

Well, death in a fiery crash was one thing, to be sure, but as the trip wore on, I started to see that my fear was not so much of us getting hurt or of hurting the beloved Bus but just a free ranging fear. In some ways, it made the trip more exciting: who knew what challenges we’d face, and how we would overcome them, and that frisson of fear was a bit like adding pepper to a bland dish—just enough to add flavor. But I was also aware that the fear and anxiety were working together, feeding each other, and it made me angry that I could not control either of them. I consciously realized that many of my fears were ridiculous (bears, what folks would think, speeding), and yet I could not seem to control them.

I wish I had some neatly packaged thing to say here, some story of how I triumphed over fear and anxiety, but I don’t. What I did was persevere. We’d say the magic words—slowly, steadily, safely—and we would roll on down the road. I didn’t overcome my fear or my anxiety, but they rode along with me, just as they have most of my life. If there is any lesson in this or salient point, it’s this: I did it. Everyone can do it. Just keep going.

Once it became clear that we were going to buy the bus, my father used his color Xerox machine to make us a card showing a common Bus –driving- Highway- 1 image with our faces embedded in it, hand cut and taped in with Dad’s enviable taping skill and flair (see header image). I couldn’t believe that would ever come true, and yet it did. If we had given into the fear and anxiety, it wouldn’t have happened, and now that we are home again, we just want to be out on the road again, fear and anxiety, anxiety and fear, yes, but also the pleasures of the trip, the people will meet, the stories we will tell. It seems a small price to pay for so much, but I think I will see if Dad still has a Tiki for the Bus, just in case. 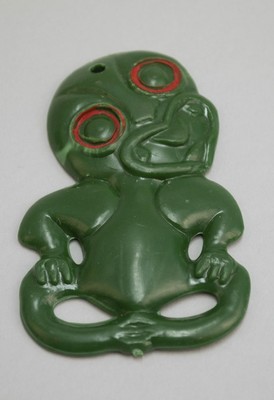