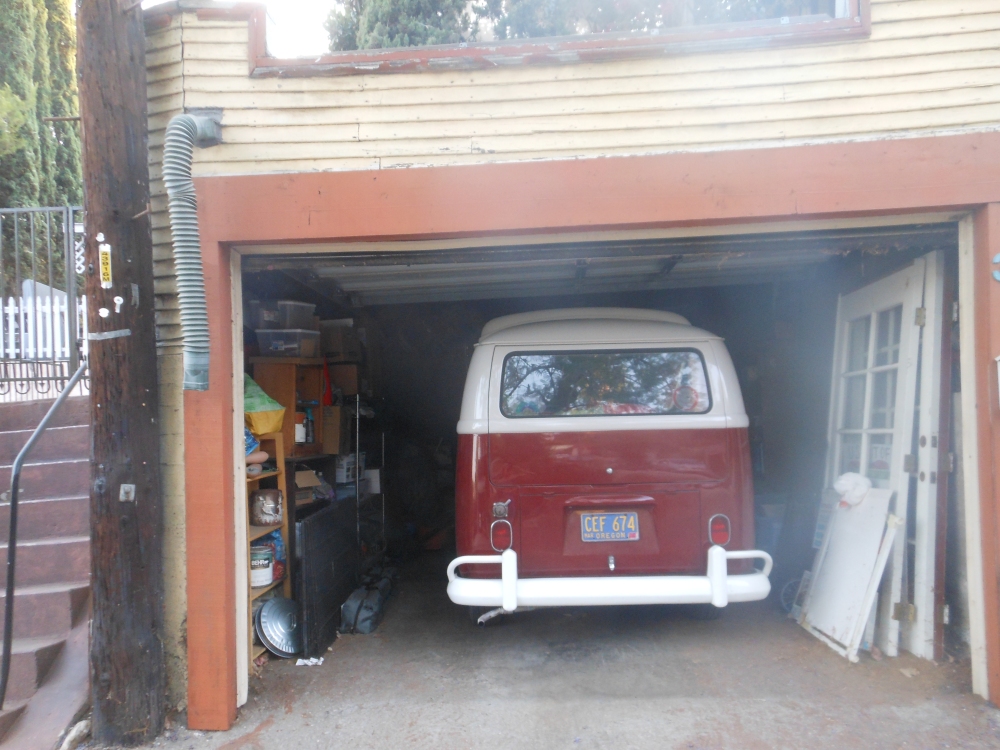 Today is the first day in many days that we have not started the bus up and driven him, even just to town for a short jaunt. Now the town surrounds the bus, the city, really, but he is safe at home. Yes, the bus fits in the garage, although the plastic tub covering the window that blew off in the windstorm will need to be replaced as it hits the garage door. When I called my folks to tell them we made it home, I mentioned the tub, and Paula didn’t seem to remember it, but I could hear Dad in the background saying “it took me a long time to find that tub, one that fit exactly,” and that’s what it did (attached with what appears to be a Ball jar canning lid and a wooden bar). I will miss the tub as it gives the bus his distinctive profile, but I also want him to fit in the garage, which he does, despite Robert’s worrying about it even before we left. 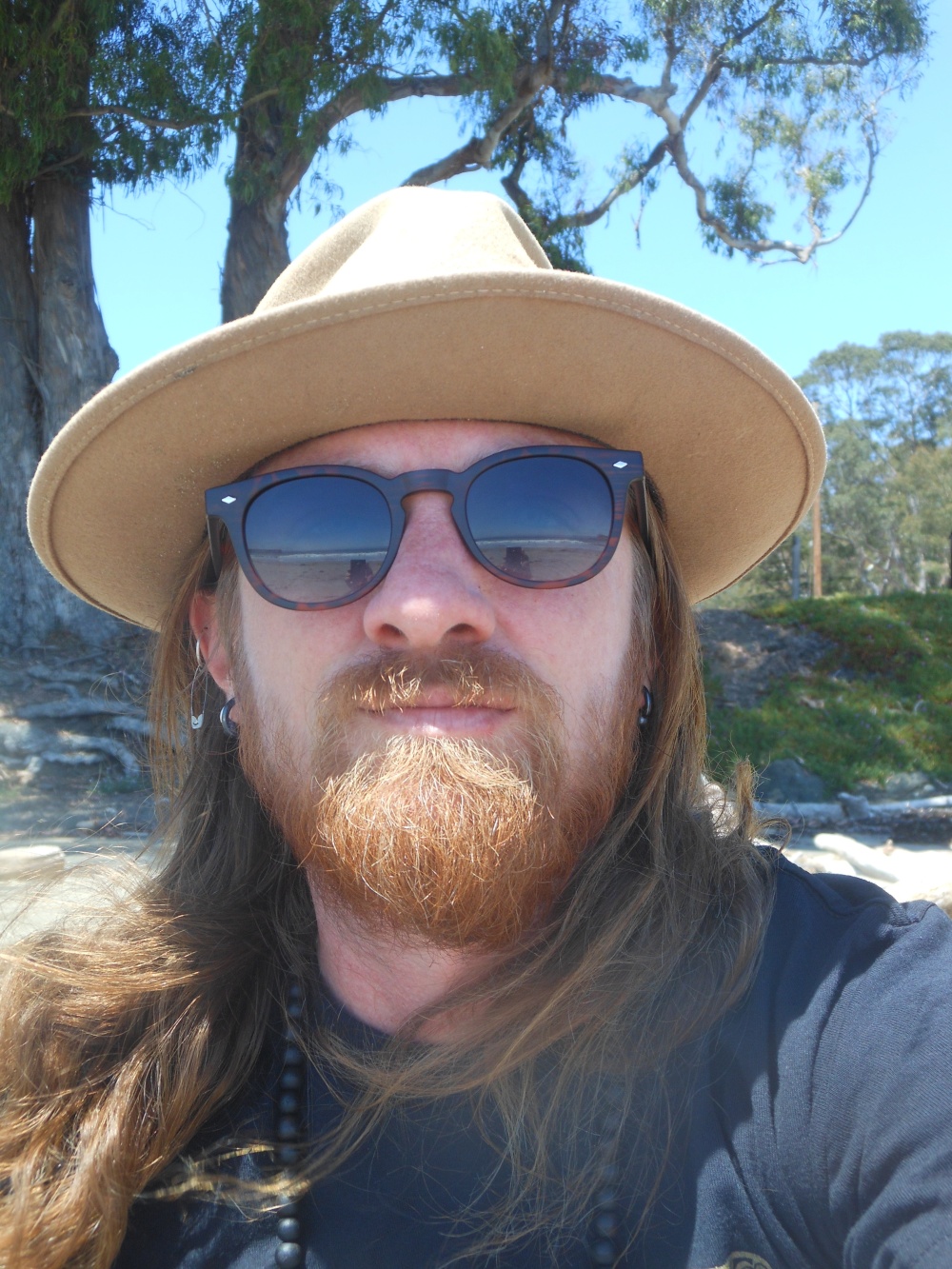 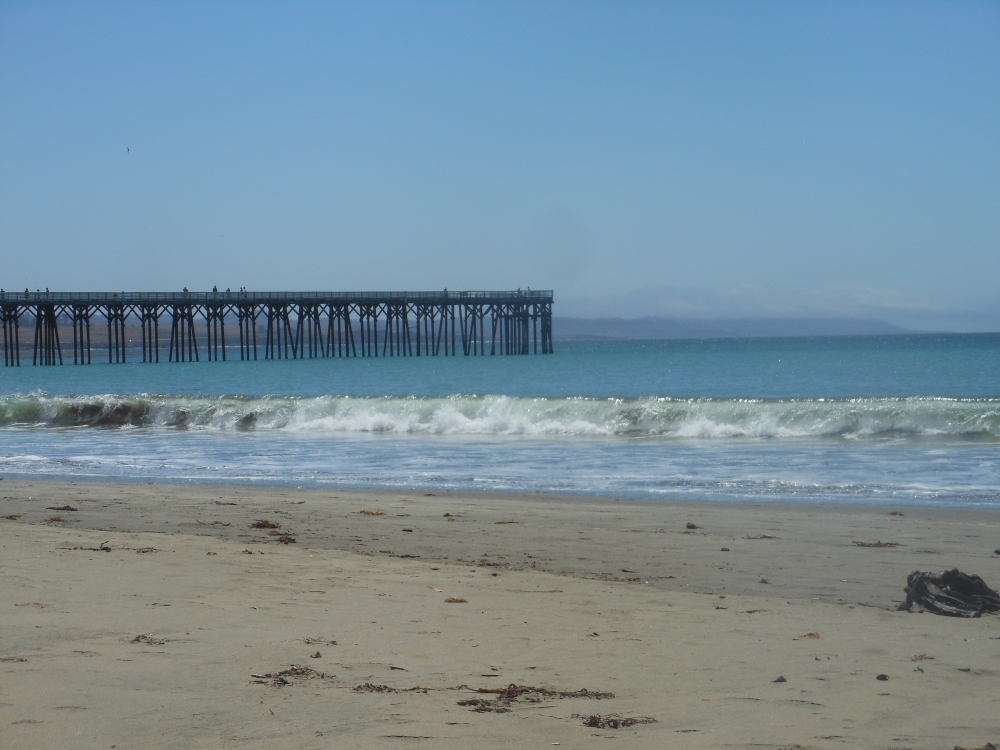 The day before we left was one of those lovely days on the Central Coast, morning fog giving way to bright sun, and we went to Hearst Beach, had lunch in Morro Bay, and got ready to leave in the morning. We also tried to set up the awning. Now, I had never heard of this awning or seen it, but Dad brought it out when we were getting ready to leave. Paula said it was really hard to set up, but Robert was confident we could manage it without instructions. “We are really good at putting things together, “ he said. Spoiler alert: we aren’t, or else this awning is the least intuitive thing I’ve ever seen, but we got all the pieces out and photographed it for posterity, despite not being able to figure out where a single piece went. It is in pristine condition, however, and those who know my father will not be surprised to learn that his excellent taping skills kept the box holding stakes together for these many years; in fact, the box is more tape than box. 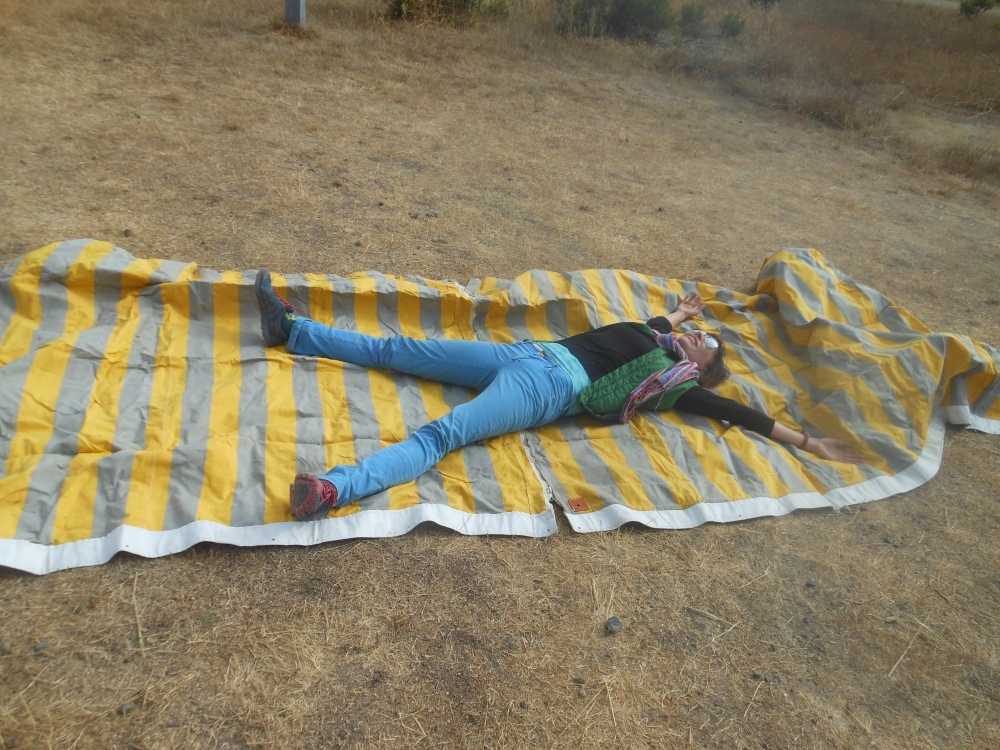 Jenny with the awning, giving up. 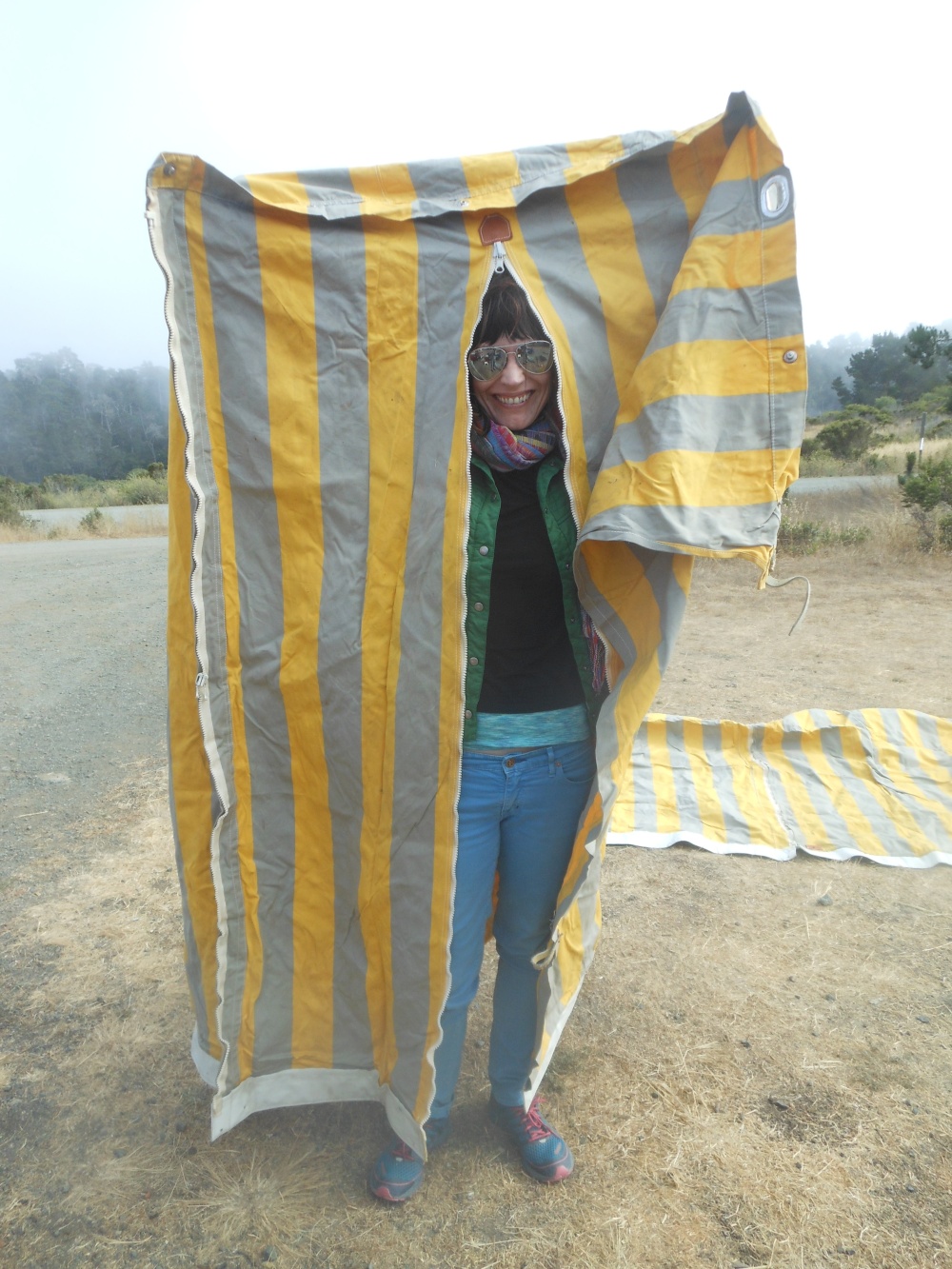 I think this is a changing room–if you know how to set this up, please let me know!

Leaving in the misty morning was a little sad, for it is always sad to come to the end of a trip, and perhaps this one more so. “It will never be exactly like this again,” I told Robert, and I meant things I couldn’t fully articulate. The bus was never new to me, but it was to him, and watching Robert fall in love with the bus, I knew that glow would be different the next time. Yes, we will take other trips (already planning them), but they will not be this trip.

We drove out on Highway 1 early through the fog, the yellow mustard blooming, brighter yellow that the golden hills, the ocean not the bright turquoise of the day before but grey and heavy. The bus ran us down into Morro Bay for breakfast and coffee, and we repeated out mantras: slowly, steadily, safely, and “The wheel is under your butt!” I was nervous about the drive into LA—230 miles being the farthest we would travel in one day, with the freeways at the end, but Robert was confident. 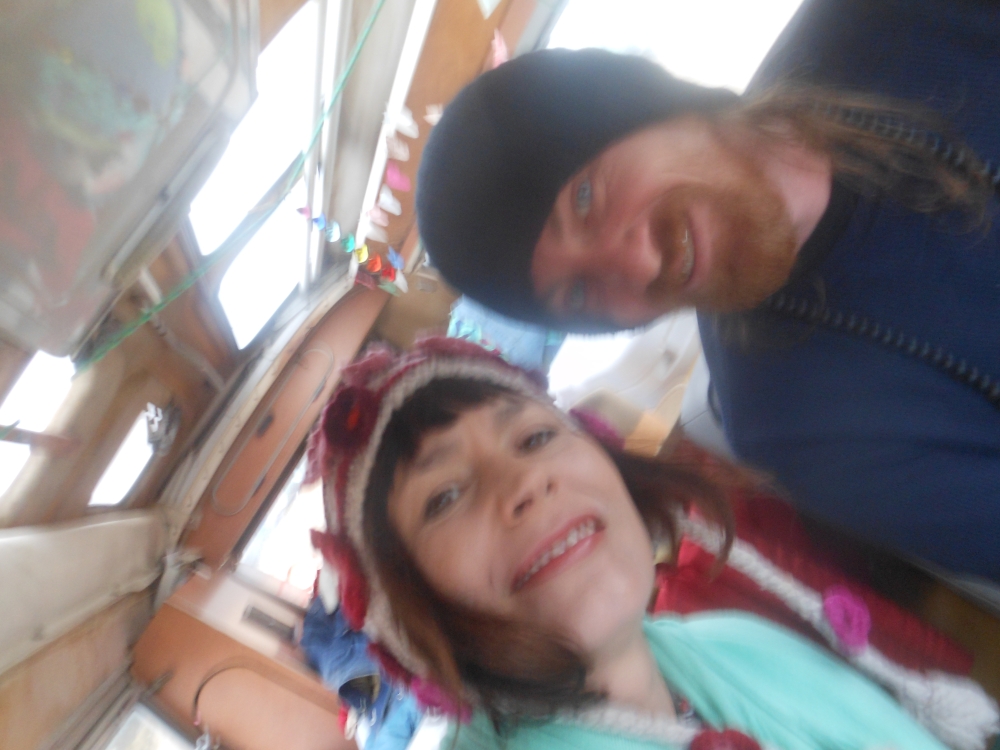 At breakfast I looked out into the gloomy parking lot and say the bus waiting for us. I felt such a swell of emotion, and I tried to explain it to Robert: “It’s not new for me to see that and recognize him, like it is for you. It’s a familiar feeling, like something that had been missing was suddenly restored, and comforting, too.” I realized that what I really felt/feel when I see the bus waiting for us is a sense of comfort, of pieces coming back together, but also of knowing my father is nearby, for that man was never far from that bus until now. I got a little teary thinking about that, for now we have of course removed the man from the bus, but I also thought that it was right in some indefinable way. My father drove me in the bus all of those years, and now Robert, who is not my father, would see us safely home together, but my father was not far from us, I felt. The whole trip I felt as though we traveled under a blessed cloud, enjoying offerings from strangers, and love on the road, and now I realized that while I will never be able to keep my father with me always, in some small way in letting us have the bus he has given us a blessing we will carry for our lifetime, or rather, the blessing will carry us.

The trip down was unremarkable, although we did meet a lovely Scottish couple that wanted to photograph the bus at a gas stop in Los Alamos. “My friend has one just like it!” the man told us. He knew exactly what the bus was, understood the camper van tent, and asked Robert if he’s had the steering switched yet. We didn’t even know that was possible, but the man insisted that his friend did it, otherwise they are just too hard to drive, which we laughed at a little, knowing all the high and twisty roads we had come through to get to the straight 101. Robert told them he was a Dunbar, and the wife said, in that distinctive Scottish accent, “Dun-bar, yes—we’ve been to the castle.” It felt like yet another little blessing to wind the trip up.

Near Ventura we got caught in what else—traffic—and finally made our way to the 118, but after the Santa Susanna pass, I was done. Cars were whizzing by, doing 90, and they just didn’t seem to recognize our slow bus the way folks on the 1 and 101 had. After I had a panic attack (sorry, Robert), we pulled off on Highway 27 and started driving in the farthest reaches of the Valley. Robert was a little disturbed that we didn’t know where we were going, but I am never afraid of getting lost, and the speed limits were 45, perfect for the bus. Eventually we found the LA River and I said “Turn left,” and so it came to pass that we followed the river home. Slowly, yes, but that’s how we roll, and there was some blessing even in that as I have taught units on the LA River for years—it fascinates me. And then we were home, and the bus fit in the garage, and that’s the way the story ends.

I have a few posts left to complete this cycle for me, things I have been writing in my head but haven’t had time to write (and now I have power and the internet!), so read them or don’t—they are likely more for me than for anyone else, but this has been a long journal, and I hate to leave a journal unfinished. We will take other trips, and I may continue to write about them, and chronicle this experience, which I know has changed my life. For now, I am happy to be home, although I would like to point out for posterity that if you dropped out of the news fro 2 weeks and then suddenly reentered it today, well, it may not have been the best day to stop sniffing glue, or driving the bus, for that matter.

Finally, thank you so much for all the people who made this possible, my family (love to all of you), my friends (you, too), the people on the road (shout out to the folks in Mendo at the Chevron station and to Larry the mechanic), and thanks most of all to my father, for being exactly who you are and were. Thank you. 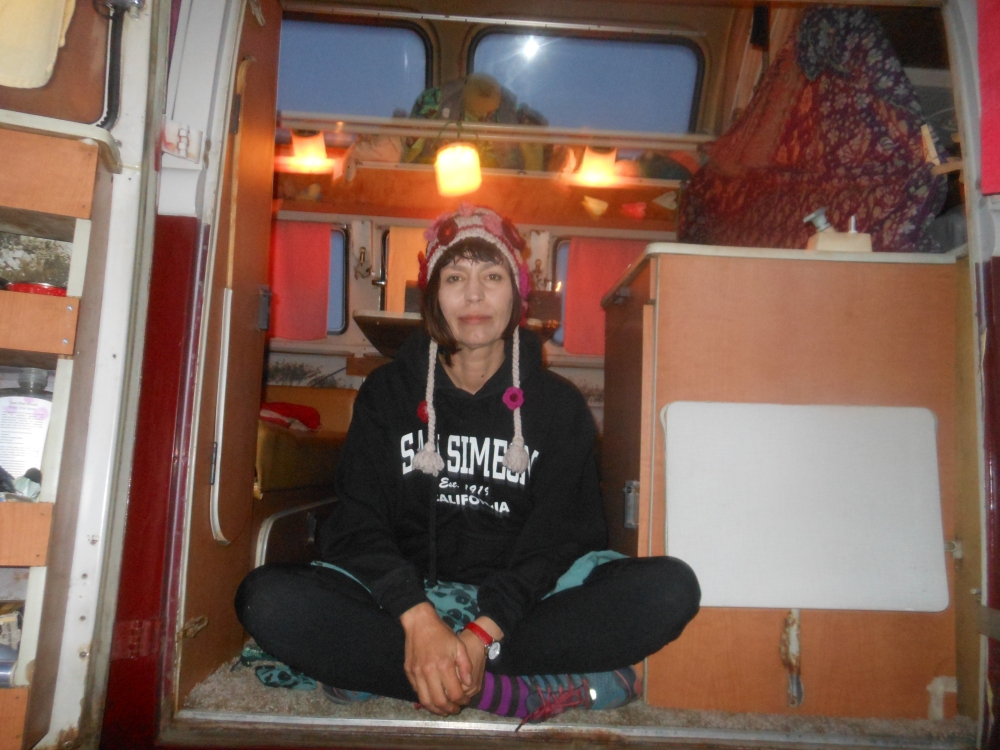 In the bus at night, getting ready to roll on home. Tired, yes, but a good tired.  For those who know: Squishy!